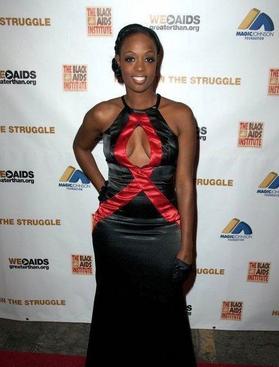 Marvelyn Brown, a 35-year-old native Tennessean, learned she was HIV-positive at age 19. Since then she has moved both live and television audiences around the United States, Bermuda, Canada, Jamaica, Mexico, the Virgin Islands, South Africa, Tanzania and Rwanda with her compelling personal story. Ms. Brown has spoken at hundreds of colleges, universities, churches and conferences worldwide. Her autobiography, The Naked Truth: Young, Beautiful and (HIV) Positive, was published by Amistad/HarperCollins in 2008.

Her humanitarian work earned her a 2007 Emmy Award for Outstanding National PSA, BET’s Rap It Up campaign named Brown one of the 25 "HEROES" in the HIV/AIDS epidemic, in 2009 she won the Do Something Award and in 2010, she was inducted into The Heroes In The Struggle Photo Exhibit by The Magic Johnson Foundation and The Black AIDS Institute..

Brown has also made a huge impact on television shows and in print media. Some highlights include, appearing on CNN's Black in America, Frontline's ENDGAME, The Oprah Winfrey Show, America’s Next Top Model, America’s Best Dance Crew, and CBS’s The Early Show.  Articles including her story have appeared in Newsweek, U.S. News and Report, Fortune 500, Cosmopolitan, Glamour and ESSENCE magazine. Brown has also graced the covers A&U, POZ and The Ave.

In addition to being a motivational speaker, advocate, author and a CEO, Brown is also an avid fan of Welch's Grape Soda and has a slight addiction to sour patch kids.  In her spare time this Taurus loves to travel world.